The Tampa Bay Buccaneers are waiving CB Rashard Robinson in order to activate RB Giovani Bernard and LB Lavonte David for the first round of the playoffs. 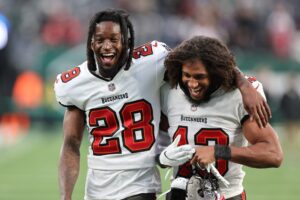 The team also elevated RB Kenjon Barner and TE Codey McElroy to the active roster from the practice squad.

Bernard, 30, is a former second-round pick of the Bengals back in 2013. He played out his rookie contract before agreeing to a four-year, $16.6 million contract that included $5 million guaranteed with the Bengals in 2016.

Bernard was set to be an unrestricted free agent last offseason but Cincinnati re-signed him to a two-year, $10.3 million extension. He was set to earn a base salary of $3,700,000 in 2021 when the Bengals released him this past offseason.

The Buccaneers later signed Bernard to a one-year deal.

In 2021, Bernard has appeared in 12 games for the Buccaneers and rushed for 58 yards on eight carries (4.8 YPC) to go along with 23 receptions for 123 yards receiving and three touchdowns.

Robinson, 26, is a former fourth-round pick of the 49ers back in 2016. San Francisco traded him to the Jets in 2017 in exchange for a fifth-round pick.

Robinson was entering the final year of his four-year, $2.72 million contract and stood to make a base salary of $2,025,000 for the 2019 season when the Jets waived him in 2019.  From there, he signed on to the Cowboys’ practice squad before they released him in July.

Robinson caught on with the Buccaneers practice squad in September and was eventually called up to the active roster.

In 2021, Robinson has been active for seven games and recorded four tackles for the Buccaneers.