Buccaneers GM Jason Licht said on the Pewter Report podcast Thursday that Blaine Gabbert could be a potential successor to Tom Brady at quarterback in the coming years. 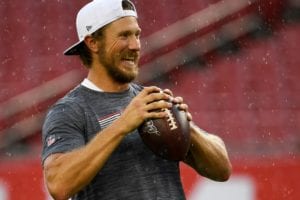 “First of all, I love his energy,” Licht said. “I’ve really gotten close to Blaine this year just being on the sidelines. He’s a really smart guy but he is one guy, my scouts and I talk about this a lot, he’s just one guy that I love to watch throw every day in practice because he has got a cannon. He’s very accurate with his throws as well and he can just really whistle them in in tight windows. If he had been forced to play, he played in the Detroit game, but if he had been forced to play more I think that he would have really opened a lot of people’s eyes about how talented he is, especially being in the same system for a couple of years.”

Gabbert, 31, is a former first-round pick of the Jaguars back in 2010. After three years in Jacksonville, he was traded to the 49ers in return for a sixth-round pick back in March of 2014.

Gabbert played out the final year of his two-year, $4 million contract before eventually signing on with the Cardinals. The Titans added Gabbert on a two-year contract worth $4 million but he was released after one season.

From there, the Buccaneers signed Gabbert to a one-year deal for the 2019 season and he turned to Tampa Bay last year on another one-year contract.

In 2020, Gabbert appeared in four games for the Buccaneers and completed 56.3 percent of his passes for 143 yards and two touchdowns. He also rushed for 16 yards.

Buccaneers & Tom Brady ‘Getting Closer’ To Reworking His Contract