Mike Garafolo of NFL Media reports that the Falcons are still holding out hope that WR Calvin Ridley will return for the 2022 season after stepping away from the team and football midseason due to personal reasons. 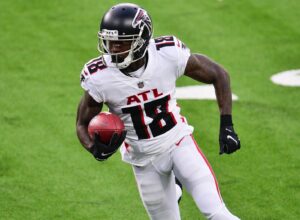 According to Garafolo, it doesn’t sound like there has been a lot of communication between the Falcons and Ridley’s camp up to this point. The two parties will need to get together at some point to figure out what’s going to work from here.

However, Garafolo believes a “fresh start” could be in the cards at some point and his “educated prediction” is that Ridley will be playing elsewhere next season.

Ridley reportedly doesn’t hold any ill will towards the Falcons and Garafolo explains that there are personal issues going on where a change of scenery could be best for him.

“It really hasn’t changed,” Fontenot said, via the Associated Press. “As an organization, we’ve done the best job we could just to support Calvin and do everything we can for him.”

Fontenot added not to assume that Ridley isn’t in their plans for the 2022 season.

“No, I wouldn’t assume anything,” Fontenot said. “As I said, we handle each situation individually. There are so many variables we deal with. We’re going to try to add to every position this offseason. Whatever player we’re talking about, whether under contract or not under contract, we have to be prepared for everything.”

The Falcons exercised Ridley’s fifth-year option this offseason which will cost Atlanta $11.116 million fully guaranteed in 2022.

In 2021, Ridley appeared in five games for the Falcons and caught 31 passes for 281 yards receiving and two touchdowns.