The Arizona Cardinals announced Sunday that head coach Kliff Kingsbury has been cleared to return after clearing the NFL’s COVID protocols. 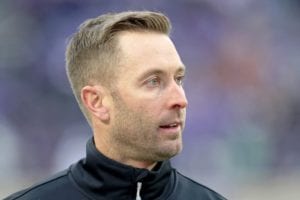 Kingsbury had to produce back-to-back negative tests in order to be available today and it looks like he got his second negative test this morning.

The Cardinals are set to take on the Texans this afternoon.

Kingsbury, 42, was hired as the Texas Tech head coach back in 2013 and spent six years in the position before he was fired back in November. USC later hired him as their offensive coordinator.

During his six seasons at Texas Tech, Kingsbury led them to a record of 35-40 (46.7 percent), which includes three Bowl game appearances.

Kingsbury is currently in his third season as the Cardinals’ head coach after taking the job in 2019. He is currently undefeated in the 2021 season with five wins and zero losses.

For his head coaching career, Kingsbury has led the Cardinals to an overall record of 18-18-1 and has not yet made an appearance in the post-season.