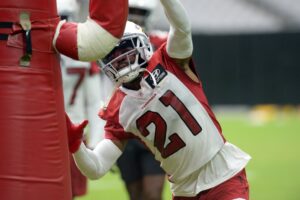 Mike Garafolo of NFL Media reported last night that Butler has been away from the team’s facility the last week due to a personal matter and he is currently mulling retirement at this time.

This means that the Cardinals will hold the rights to Butler should he unretire at some point, but he will not count against their 53-man roster.

Butler, 31, wound up signing on with the Patriots as an undrafted free agent out of West Alabama back in 2014. He played out the final year of his rookie contract before signing a one-year restricted tender worth $3.91 million for the 2017 season.

From there, Butler agreed to a five-year contract worth more than $61 million to go along with over $30 million guaranteed with the Titans in 2018. He was owed a base salary $11,100,000 for the 2021 season when the Titans released him.

Butler signed a one-year deal with the Cardinals this past March.

In 2020, Butler appeared in all 16 games for the Titans and recorded 100 tackles, four interceptions and 14 passes defended. Pro Football Focus had him rated as the No. 15 cornerback out of 121 qualifying players.

We’ll have more regarding Butler as the news is available.