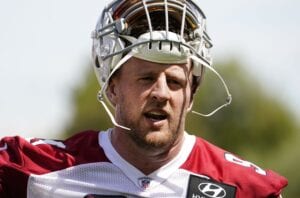 Watt suffered a hamstring injury and practice. He can be activated from the PUP list at any time.

Watt, 32, is a former first-round pick of the Texans back in 2011. He was in the final year of his eight-year, $108.88 million contract that includes $51.8 million guaranteed when he was released by the Texans.

Watt was owed a non-guaranteed base salary of $17.5 million in 2021. The Cardinals signed him to a two-year deal worth $31 million its past March.