The Arizona Cardinals announced on Tuesday that they are promoting WR coach Shawn Jefferson to assistant head coach in his second year with the team. 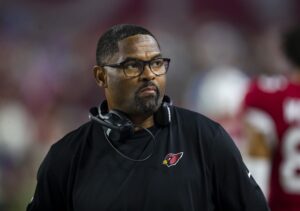 Jefferson, 53, is a former ninth-round draft pick by the Chargers out of UCF back in 1991. After four seasons with San Diego, he went on to play for the Patriots, Falcons, and Lions.

He later began his coaching career with Detroit, spending six seasons with the team as an offensive assistant and wide receivers coach. Jefferson then coached wide receivers with the Titans, Dolphins, and Jets before joining the Cardinals coaching staff in 2021.

Jefferson is the father of Rams’ WR Van Jefferson and had 470 career receptions for 7,023 yards and 29 touchdowns. He last served as assistant head coach and wide receivers coach for the Jets from 2019 to 2020.

Marquise Brown In Line For Big Money Extension From Cardinals