Josina Anderson of ESPN is reporting that the Cardinals have placed CB Alfonzo Dennard on waivers Wednesday.

Dennard’s time in Arizona was obviously short lived, as the Cardinals claimed him off of waivers from the Patriots just a few months ago.

Dennard, 25, is in the final year of his four-year, $2.157 million rookie contract and is set to make a base salary of $1.542 million for the 2015 season. He’ll need to pass through waivers before he can sign on with a team of his choosing.

In 2014, Dennard appeared in six games for the Patriots and record 15 tackles, one interception and a pass defense. 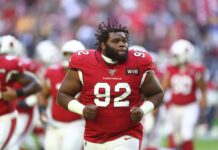