According to Aaron Wilson, the Cardinals are signing WR Darece Roberson to a contract on Thursday. 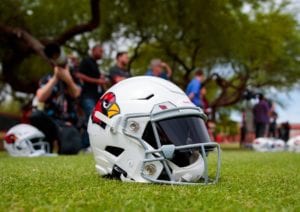 Roberson went undrafted out of Wayne State last year but did not have an opportunity to work out for NFL teams due to the global pandemic.

After “excelling” in a recent pro day, the Cardinals have signed him to his first professional contract.

Arizona has also signed RB Tavien Feaster to the roster, per his agent.

Congrats Tavien Feaster on signing with the @AZCardinals! pic.twitter.com/7krBIjlZYQ

Feaster, 23, signed with the Jaguars as an undrafted free agent out of South Carolina following the 2020 NFL Draft. Jacksonville waived him in August and he caught on briefly with the Giants before being waived again coming out of camp.

Feaster had a stint on the Lions’ practice squad but was waived again.