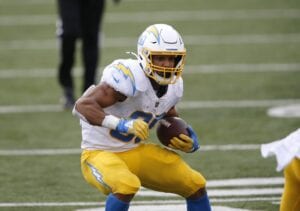 In 2020, Ekeler appeared in four games for the Chargers and rushed for 248 yards on 49 carries (5.1 YPC) to go along with 17 receptions for 144 yard receiving and one touchdown.