Chargers C Mike Pouncey said he’s received medical clearance from his doctors to return to the field in 2020. 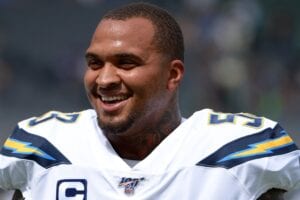 “I feel great,” he said via the Athletic’s Daniel Popper.

However, it’s good news for the Chargers that a potentially serious injury won’t sideline him for longer. He should return in 2020 as the Chargers’ starting center.

Pouncey, 30, is a former first-round pick of the Dolphins back in 2011. He was entering the fourth year of his six-year, $52.438 million contract that included $22 million guaranteed and was set to make a base salary of $7.97 million when the Dolphins released him in 2018.

Pouncey signed with the Chargers in 2018 on a two-year, $15 million deal. He signed a one-year, $9 million extension with Los Angeles last year.

In 2019, Pouncey started all five games he appeared in for the Chargers and was rated by Pro Football Focus as the No. 21 center out of 33 qualifying players.