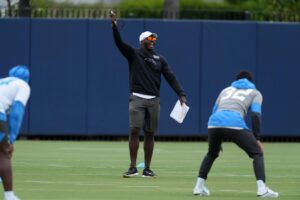 Football Outsiders has the Chargers’ special teams unit ranked No. 27 in the league for the 2021 season.

Swinton, 36, began his coaching career as a defensive graduate assistant with the University of Tennessee from 2007-2008 and was signed by the Rams as their STs quality control coach for the next three years.

He held the same position with the Chiefs in 2012 and became the Broncos’ assistant STs coach in 2013-2014. The 49ers hired him as STs coordinator in 2016 and held positions with the Bears and Lions over the next two years.

From there, he was signed as the Cardinals’ assistant STs coach in 2020 following a fellowship and was signed by the Chargers as its STs coordinator last offseason.