The two sides were reportedly working on a new contract a few weeks ago so it’s not shocking that he’ll be back in San Diego next season. Castillo has started for the Chargers since being drafted seven years ago, but his ability has decline some and his injury history is concerning,  so he’ll have to prove that he’s still worthy of being a starter for them. The Chargers need better play from their defensive line next season so it will be interesting to see how patient they are with some of their guys. 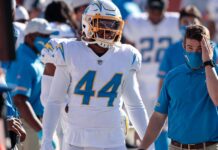 187,529FansLike
7,623FollowersFollow
275,775FollowersFollow
© NFLTradeRumors.co is an independent news source and has no affiliation with the National Football League (NFL), NFL.com, or any team(s).
wpDiscuz