TMZ Sports is reporting that Chiefs DE Frank Clark was arrested on Sunday. According to the report, Clark was pulled over for a routine traffic stop in Los Angeles when they noticed an open duffle bag. 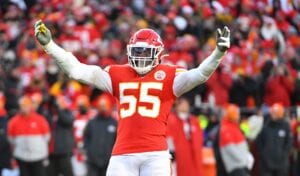 Sources tell TMZ that officers saw a gun inside the bag that turned out to be an uzi. Clark was arrested for felony illegal possession of a firearm.

Clark is reportedly still in a Los Angeles area jail.

Sam McDowell of the Kansas City Star reports that Clark was also arrested in March along with another man on a gun charge during a traffic stop.

According to McDowell, officers observed and recovered two loaded firearms from the vehicle on March 12 and Clark and the other man were pulled over because the vehicle in which they were traveling did not have a front license plate.

Clark, 28, is a former second-round pick of the Seahawks back in 2015. He played out his four-year, $3.732 million contract and was subsequently franchise-tagged by the Seahawks.

Seattle then traded Clark to the Chiefs in exchange for a first and second-round pick. Clark signed a five-year, $105.5 million extension in Kansas City.

In 2020, Clark appeared in 15 games for the Chiefs and recorded 29 tackles, six sacks, a fumble recovery and two pass deflections. 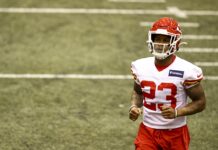