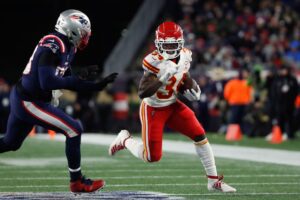 Thompson, 24, was drafted by the Chiefs in the sixth round out of Utah State in 2019. He was entering the third year of a four-year, $2.6 million rookie contract when Kansas City waived him back in August. He signed with the Buccaneers’ practice squad shortly after.

Thompson just retuned to the Chiefs’ practice squad on Friday.