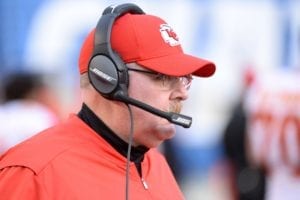 Both will be under team control through the 2025 season.

Jason La Canfora of CBS Sports recently reported that the Chiefs were working on new long-term extensions for both Reid and Veach, so this shouldn’t come as a big surprise.

Reid, 62, is in his eighth season with the Chiefs. He began his coaching career with the Eagles in 1999 and spent 14 seasons in Philadelphia before he was fired in 2012.

The Chiefs hired him as their head coach soon after and he’s spent the last seven seasons in Kansas City.

Since taking over as Chiefs head coach back in 2013, Reid has led the team to a record of 130-93-1 (58.3 percent), which includes six trips to the postseason in seven years and a Super Bowl Championship in 2019.

Veach, 42, began working in the NFL when he interned for the Eagles while Reid was still the team’s head coach. After Reid was fired in Philadelphia, he brought Veach with him to the Chiefs where he served as their pro and college personnel analyst before being promoted to co-director of player personnel in May of 2015.

Kansas City fired John Dorsey back in 2017 and later promoted Veach as their GM.

During Veach’s three years as GM, the Chiefs have posted a record of 34-14 (70.8 percent), which includes three trips to the playoffs and a Super Bowl title last year.