According to Howard Balzer, the Kansas City Chiefs brought in four free agents for workouts on Tuesday.

The full list of tryouts for the Chiefs includes:

Of this group, the Chiefs signed Allen to their 53-man roster.

Jones, 25, originally signed on with the Chargers as an undrafted free agent out of West Georgia back in April. He was able to make Los Angeles’ active roster coming out of the preseason before being waived last week.

In 2018, Jones appeared in three games for the Chargers as a return specialist and recorded 69 kickoff return yards, 24 punt return yards, and lost one fumble. 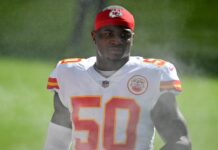