Adam Schefter reports that the University of Colorado reached out to Chiefs OC Eric Bienemy Thursday night to gauge his interest in their head-coaching vacancy.

“Nothing imminent,” a source tells Schefter. “EB is doing his due diligence.”

Bieniemy is a former alum and happens to be Colorado’s all-time leading rusher, but figures to be a top head-coaching candidate in the NFL next year.

Beyond that, it would be a tough situation to walk into, consider the impact on recruiting and hiring a staff at this late in the offseason would be very difficult.

Bieniemy, 50, played 10 seasons in the NFL for the Chargers, Bengals and Eagles before retiring in 1999. His NFL coaching career began in 2006 when he took over as the Vikings’ RBs coach.

The Chiefs hired him for the same position in 2013 and he was later promoted to offensive coordinator last year. 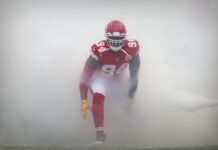