Adam Schefter reports that the Colts are claiming DT Byron Cowart off of waivers from the Patriots. 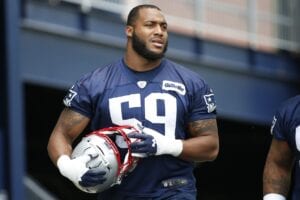 Cowart missed the 2022 season after being placed on the PUP list coming out of the preseason.

Cowart, 26, is a former fifth-round pick of the Patriots back in 2019 out of Maryland. He’s currently in the final year of his four-year, $2.8 million contract.