According to Tom Pelissero, the Colts are signing kickers Chase McLaughlin and Lucas Havrisik to the practice squad. 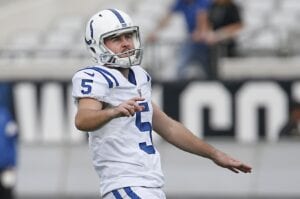 He points out McLaughlin played for the Colts in 2019 and Havrisik was with them this summer during rookie minicamp, so there’s a level of familiarity for Indianapolis.

They’ll replace Rodrigo Blankenship and one will be elevated for Week 2 against the Jaguars.

McLaughlin, 26, originally signed on with the Bills as an undrafted free agent out of Illinois in 2019. He was among Buffalo’s final roster cuts coming out of the preseason and caught on with the Vikings’ practice squad.

From there, McLaughlin had stints with the Chargers, 49ers, Colts, Vikings and Jaguars before he was claimed off of waivers by the Jets near the end of the 2020 season. New York waived him in May and he was claimed again by the Browns.

Cleveland waived him back in May.