Zak Keefer reports that the Colts are working to sign veteran QB Nick Foles to a contract. 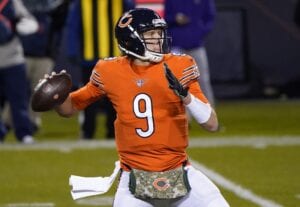 Keefer adds that while nothing is done, there’s a chance one could be available by next week.

Foles, 33, is a former third-round pick of the Eagles back in 2012. Philadelphia traded Foles to the Rams back in 2015 in a deal for QB Sam Bradford and he later signed an extension with the team.

From there, Foles signed a four-year, $88 million contract with the Jaguars that included $50.125 million guaranteed. He was traded to the Bears in 2020.

In 2021, Foles appeared in one game for the Bears and completed 24 of 35 attempts for 250 yards and one touchdown.