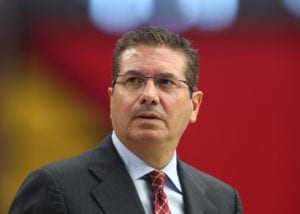 Snyder was asked to testify in today’s hearing as the committee investigates the toxic workplace environment in the Washington franchise, one that already resulted in NFL sanctions against the team and Snyder.

However, he declined, citing a pre-planned trip to France. He also refused to appear via video conference when the option was given.

“Mr. Snyder’s refusal to testify sends a clear signal that he is more concerned about protecting himself than coming clean to the American public. If the NFL is unwilling to hold Mr. Snyder accountable, then I am prepared to do so,” Maloney said, via Ben Standig.

NFL commissioner Roger Goodell is in Washington testifying in front of the committee today. The league declined to publicize the results of its workplace investigation by Beth Wilkinson, arguably shielding Snyder from more intense consequences.

There is also an ongoing investigation by the league, headed up by Mary Jo White, into more allegations against the team, including embezzlement.

USA Today’s Jarrett Bell reports that frustration from other NFL owners in Snyder and his never-ending cascade of scandals is growing, and one owner even told Bell “we are counting votes” to potentially force him to sell the team.

If Snyder is forced to testify before Congress, this will do nothing to lower the temperature regarding his ownership of the franchise.

We’ll have more on Snyder and the Commanders as the news is available.