The Dallas Cowboys have designated DE DeMarcus Lawrence to return from injured reserve, per Todd Archer. 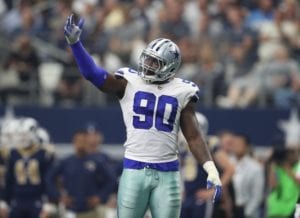 Lawrence was at practice on Wednesday, starting his 21-day window to be added to the active roster.

He has been out since the beginning of the season with a foot injury sustained in practice.

Dallas once again franchised Lawrence at the start of 2019 before agreeing on a five-year, $105 million deal last year. He was placed on the Physically Unable to Perform list in July but was activated last month and played in Week 1.

In 2021, Lawrence has appeared in one game for the Cowboys and recorded five tackles, no sacks and a forced fumble.