According to Tom Pelissero, Cowboys DT Trysten Hill‘s suspension has been reduced from two games to one following his appeal. 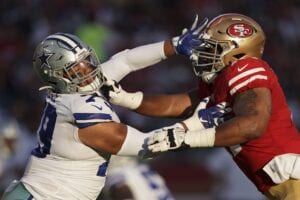 NFL Senior Vice President of Football and International Communications Michael Signora announced that appeals officer Derrick Brooks has reduced Hill’s suspension and the defensive tackle will now only be subject to miss Thursday’s Week 13 game against the Saints.

Hill was originally suspended two games without pay for punching Raiders OL John Simpson after their Thanksgiving game. The decision was made by NFL VP of Football Operations Jon Runyan, who reviewed all video from their indecent.

Hill, 23, was drafted by the Cowboys in the second round out of Central Florida in 2019. He’s in the third year of his four-year, $4.878 million rookie contract with Dallas.

In 2021, Hill has appeared in three games for the Cowboys and recorded eight tackles and no sacks.