Cowboys HC Mike McCarthy told reporter that the team is placing starting OT Terence Steele on the COVID-19 list and he won’t play on Thursday against the Saints, per Michael Gehlken. 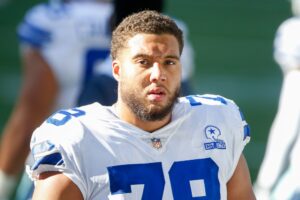 Ruling Steele out this quickly suggests he might not be vaccinated, as unvaccinated players must sit out 10 days if they test positive and five days if they’re a close contact.

Steele has seen considerable action at both left and right tackle this season.

Steele, 24, signed with the Cowboys as an undrafted free agent out of Texas Tech in 2020. He signed a three-year, $2.295 million deal and made the team coming out of the preseason each of the past two years.

In 2021, Steele has appeared in 11 games and made 10 starts for the Cowboys at tackle. Pro Football Focus has him rated as the No. 53 tackle out of 81 qualifying players.