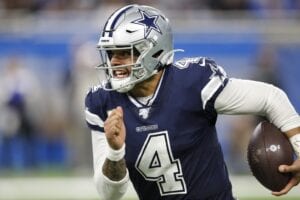 Prescott, 28, is a former fourth-round pick of the Cowboys back in 2016. He played out the final year of his four-year, $2.72 million contract and was in line to be an unrestricted free agent last year when Dallas placed the franchise tag on him.

He then signed a four-year, $160 million contract that includes a record $126 million guaranteed. The contract can top out at $164 million.

In 2020, Prescott appeared in four games for the Cowboys and completed 68 percent of his passes for 1,856 yards, nine touchdowns, and four interceptions. He also rushed for 93 yards and three touchdowns.