According to Michael Gehlken, the Cowboys are waiving K Lirim Hajrullahu on Tuesday. 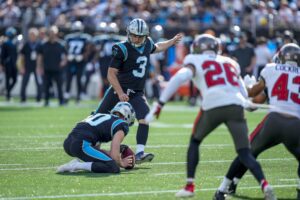 He had been competing for Dallas’ starting kicker job but the team is electing to go with Brett Maher for now.

Sam and Sprinkle were cut with injury designations.

Hajrullahu, 32, has kicked and punted in the CFL since 2014, including stints with the Winnipeg Blue Bombers, Toronto Argonauts, and Hamilton Tiger-Cats

From there, Hajrullahu signed on to the Panthers’ practice squad but was released due to issues with his visa. He returned on a futures deal for 2021 but Carolina cut him back in March. He later appeared for both the Cowboys and Panthers in 2021.

The Panthers released him, once again, back in May. He returned to the Cowboys on a deal in July.

In 2021, Hajrullahu appeared in two games for the Panthers and one for the Cowboys. He made four of his five field goals and converted on all eight of his extra point attempts.