According to Charles Robinson, Browns QB Deshaun Watson, in conjunction with his camp and the NFL Player’s Association, plans to sue the NFL if he is suspended for the full 2022 season. 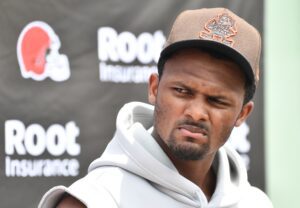 The two sides right now are waiting for the league arbitrator, retired judge Sue Robinson, to hand down her decision on a suspension. Charles Robinson says that could come in the next couple of weeks, either before or right at the start of training camp for the Browns.

If Sue Robinson decides Watson should be suspended for a year, or the NFL appeals her decision and increases Watson’s suspension to that level, Watson’s camp has already decided it will pursue action in federal court against the NFL, per Charles Robinson.

Others in the past, like Cowboys RB Ezekiel Elliott and QB Tom Brady, have appealed suspensions in federal court. In the past, though, the NFL’s collective bargaining agreement has granted a wide range of latitude to the league and commissioner Roger Goodell when it comes to player discipline.

Under the new CBA, as long as Judge Robinson suspends Watson for any amount of time, the NFL and Goodell can modify the suspension.

Reports have indicated the NFL is seeking an indefinite suspension of at least a year for Watson. Hearings between the league, the NFLPA and the disciplinary officer wrapped up in early July.

Watson has settled 20 of the 24 cases against him for varying degrees of sexual misconduct against him. The Houston Texans also settled lawsuits from 30 women claiming they enabled objectionable behavior from Watson during massage appointments.

The four remaining cases appear like they will be heard in 2023. Should Watson fight a suspension in federal court, that would also drag the situation out further, although it could potentially allow him to play in the interim.