Veteran free agent WR Dez Bryant said he would be interested in signing with the Cardinals and playing alongside DeAndre Hopkins, Christian Kirk, and Kyler Murray. 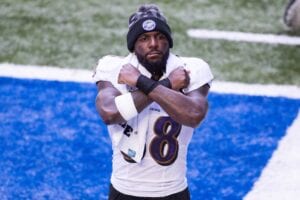 “I think that would be dope being next to my boy D Hop, Christian Kirk, Kyler Murray,” Bryant said, via TMZ. “I think they have a dope offense. I feel like they got a dope defense. I think they got a dope coach … If I had to choose, yeah, if that opportunity presented itself, I think I would take it.”

Bryant added that he would also be open to re-signing with the Cowboys.

A few weeks ago, Bryant tweeted that he intends on playing for two more seasons. However, he made it clear that he’s unlikely to be back in Baltimore for the 2021 season.

All in all, Bryant is comfortable with how he performed during his season with the Ravens after being out of the league since 2018.

“Yea but it’s hard.. I’ve been off almost 3yrs..I flashed my abilities 2 the point [John] Harbaugh asked was I ready to play because he thought I was ready and I did the colts game ..reminding all of you.. you have to learn the playbook.. chemistry with the Qb have 2 be on point,” said Bryant.

Bryant, 32, is a former first-round pick of the Cowboys back in 2010. He was in the third year of his five-year, $70 million contract that included $45 million guaranteed and was set to make base salaries of $12.5 million over the final two years of the agreement when Dallas released him in 2018.

The Saints signed Bryant to a one-year deal worth $600,000 over the remainder of the season, but he suffered a torn Achilles. It took until October of 2020 for him to sign on to the Ravens’ practice squad and he was later added to Baltimore’s active roster.

Kyler Murray Not At Cardinals OTAs This Week

Marquise Brown In Line For Big Money Extension From Cardinals