According to Cameron Wolfe, the Dolphins are considering releasing LB Kyle Van Noy in a cap-saving maneuver. 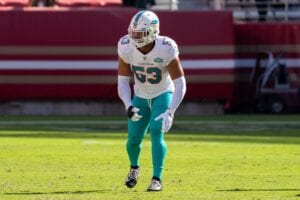 Wolfe says cutting Van Noy, who was one of Miami’s premier free-agent additions just last offseason, would save the Dolphins $9.75 million in cap space.

The lower salary cap number is going to force some hard decisions by teams in the coming days. Releasing Van Noy would fall into that category, as he hasn’t really been on the radar as a cap casualty until now.

Van Noy, 29, is a former second-round pick of the Lions back in 2014. He was in the final year of his four-year, $5.1 million contract when the Lions traded Van Noy midseason to the Patriots for a sixth-round pick in 2016.

Van Noy later signed a two-year extension with the Patriots. After finishing out that contract, he agreed to a four-year, $51 million contract with the Dolphins in 2020.

In 2020, Van Noy appeared in 14 games for the Dolphins and recorded 69 tackles, six sacks, two forced fumbles, two recoveries and six pass defenses. Pro Football Focus had him rated as the No. 26 linebacker out of 83 qualifying players.