Update: Mike Garafolo says Dolphins DT Davon Godchaux‘s second opinion indicated it would be possible for him to return this season after a few months of rehab.

Cameron Wolfe reports it’s a three-month recovery timeline for Godchaux, which would have him back at the end of the season and potentially the playoffs if Miami qualifies.

Expect Godchaux to be placed on injured reserve soon where he can stay until he’s healthy enough to return hopefully late in the season.

According to Mike Garafolo, Dolphins DT Davon Godchaux is getting a second opinion on a biceps injury sustained this past week. 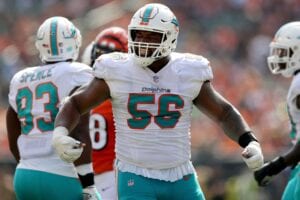 The injury is feared to be season-ending but Godchaux is hoping a second opinion provides some good news.

Godchaux, 25, is a former fifth-round pick of the Dolphins back in 2017. He’s currently in the final year of his four-year, $2.6 million contract.

Godchaux is in line to be an unrestricted free agent in 2021.

In 2020, Godchaux has appeared in five games for the Dolphins and recorded 14 total tackles and no sacks.