According to Barry Jackson of the Miami Herald, Dolphins owner Stephen Ross is expected to discuss a potential job with Hall of Fame QB Dan Marino.

CBS Sports fired Marino and Shannon Sharpe back in February and replaced them with Tony Gonzalez and Bart Scott.

The idea of Marino joining the Dolphins in some capacity has been floated for a few months now. Miami has dealt with a good amount of local criticism in recent years, so it wouldn’t be surprising to see him take on an ambassador role of sorts that would allow him to work with Dolphins fans in some capacity. 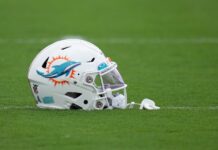