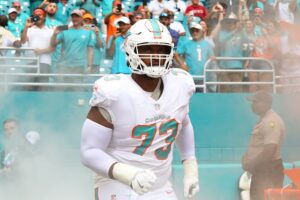 Jackson is dealing with an ankle injury and McDaniel explained that they don’t want it to linger throughout the season. Miami will move Greg Little to right tackle in place of Jackson.

Jackson will now miss the next four games while on injured reserve.

Jackson, 23, was a two-year starter at USC and was a first-team All Pac 12 selection before being selected with the No. 18 pick in the 2020 draft by the Dolphins.