According to Cameron Wolfe, the Dolphins are promoting QB coach George Godsey and RB coach Eric Studesville to co-offensive coordinators. 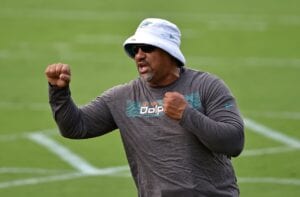 Wolfe says it’s not clear yet who will call the plays but the two will collaborate on running the offense.

Studesville, 53, began his NFL coaching career with the Bears back in 1997 as their RBs coach. He worked for the Giants and Bills before being hired by the Broncos back in 2010.

Denver elected to promote Studesville to assistant HC/RBs coach before firing him in 2018. He joined the Dolphins as their RB coach in 2018 and has been there since.

Godsey, 42, began his NFL coaching career with the Patriots back in 2011 as an offensive assistant. He worked his way up to tight ends coach before he was hired by the Texans as their QB coach in 2014. A year later, Houston elevated him to offensive coordinator but elected to move on after two seasons.

The Lions later hired Godsey as their defensive assistant-special projects before promoting him to QB coach in 2018. He joined the Dolphins as a TE coach in 2019 and shifted back to QB coach this past season.