Barry Jackson reports that the Dolphins made the decision to trade for Chiefs RB DeAndre Washington on Tuesday because RB Myles Gaskin has sprained MCL and is expected to miss three games. 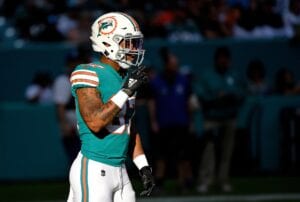 Gaskins could be placed on injured reserve in the coming days, as Miami would be allowed to activate him after missing three games.

The Dolphins have Matt Breida and Jordan Howard next in line to handle the workload while Gaskin is out.

Gaskin, 27, is a former seventh-round pick of the Dolphins back in 2019. He signed a four-year, $2.6 million contract with the Dolphins.

In 2020, Gaskin has appeared in seven games for the Dolphins and rushed for 387 yards on 110 carries (3.9 YPC) to go along with 30 receptions for 198 yards receiving and two total touchdowns.