The Miami Dolphins worked out four cornerbacks on Thursday, according to Aaron Wilson.

Pitts, 28, wound up going undrafted out of Pittsburgh back in 2016. He later signed on with the Dolphins and spent over a year in Miami.

From there, Pitts had brief stints with the Jaguars and Bills before the Colts signed him to a futures contract after the 2019 season. He was, unfortunately, waived coming out of training camp. He then bounced on and off the Bills practice squad in 2020.

In 2018, Pitts appeared in all 16 games for the Bills and recorded eight tackles and no interceptions.

Williams was on and off of the Eagles’ roster last year before signing a futures contract with the Steelers this past January. The Steelers opted to cut Williams back in May of 2020.

In 2020, Williams appeared in two games for the Eagles and recorded three total tackles, one pass defense, and no interceptions. 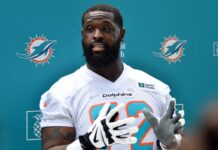