Field Yates of ESPN reports that the Dolphins have not yet released OLB Kyle Van Noy because the team is trying to trade him. 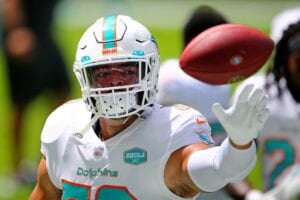 Yates admits that it’s going to be difficult for Miami to find a trade partner for Van Noy, but they’re at least attempting to make it work before cutting him loose.

Reports surfaced earlier in the week that the Dolphins are going to release Van Noy and he even issued a statement regarding the news.

However, it’s common for teams to announce a player will be released only to shop them in trade talks in case a deal surfaces.

According to Over The Cap, trading Van Noy would create $4.125 million in dead money for the Dolphins.

Van Noy, 29, is a former second-round pick of the Lions back in 2014. He was in the final year of his four-year, $5.1 million contract when the Lions traded Van Noy midseason to the Patriots for a sixth-round pick in 2016.

Van Noy later signed a two-year extension with the Patriots. After finishing out that contract, he agreed to a four-year, $51 million contract with the Dolphins in 2020.

In 2020, Van Noy appeared in 14 games for the Dolphins and recorded 69 tackles, six sacks, two forced fumbles, two recoveries and six pass defenses. Pro Football Focus had him rated as the No. 26 linebacker out of 83 qualifying players.