According to Ian Rapoport, the Eagles are also cutting CB Rasul Douglas as a part of their final cuts. 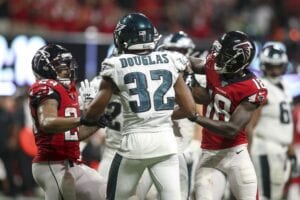 Douglas had been on the trade block earlier this offseason and wasn’t projected to start, so this isn’t entirely a surprise. It is notable to see the Eagles decide to move on from both him and CB Sidney Jones, however.

The Eagles and Douglas also agreed to a pay cut earlier this offseason.

In 2019, Douglas appeared in all 16 games for the Eagles and recorded 35 tackles, no interceptions and 10 passes defended. Pro Football Focus has him rated as the No. 98 cornerback receiver out of 113 qualifying players.