Eagles HC Doug Pederson confirmed Monday that CB Ron Brooks is out for the season after he unfortunately ruptured his right quad tendon during Sunday’s win over the Vikings.

The Eagles will likely place Brooks on injured reserve in the coming days.

Les Bowen reports that Eagles CB Ron Brooks suffered a ruptured a quad tendon during Sunday’s win over the Vikings.

Eagles CB Ron Brooks was carted off the field during the first quarter of Sunday’s game against the Vikings with an apparent knee injury.

The Eagles have already ruled Brooks out for the remainder of the game.

Brooks went down while trying to make a tackle. The Eagles’ medical staff placed a support brace on Brooks’ knee before he was carted to the locker room.

Brooks, 28, is a former fourth-round pick of the Bills back in 2012. After four years in Buffalo, Brooks signed a three-year, $6 million contract with the Eagles as a free agent back in March.

Entering today’s game, Brooks had recorded 14 tackles, a fumble recovery and a pass defense for the Eagles over the course of five games.

We’ll have more regarding Brooks’ injury as the news is available. 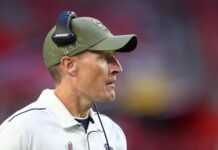 190,562FansLike
7,623FollowersFollow
275,136FollowersFollow
© NFLTradeRumors.co is an independent news source and has no affiliation with the National Football League (NFL), NFL.com, or any team(s).
wpDiscuz
You are going to send email to
Move Comment