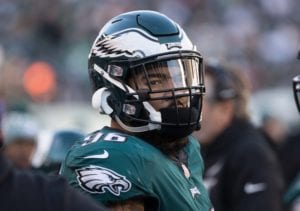 Barnett, 25, is a former first-round pick of the Eagles back in 2017. He was in the final year of his four-year, $12.85 million contract that includes $12.85 million guaranteed when the Eagles picked up his fifth-year option last year.

Barnett will be an unrestricted free agent in 2022.

In 2021, Barnett has appeared in 15 games for the Eagles and recorded 44 tackles and two sacks.