This is terrible news for the Eagles as Peters is coming off of an incredible in season in which he was rated as the best offensive tackle in the league by Pro Football Focus. That’s not something that you’re going to be able to replace on the open market at this point. With that being said, the Eagles decided to re-sign King Dunlap earlier in the day to add some depth at the tackle position.

As of now Philly appears to be heading into the 2012 season with Dunlap and Todd Herremans at the tackle positions but it wouldn’t be surprising to them address the offensive line in the upcoming draft. 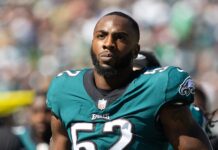