According to Andrew DiCecco, the Eagles are releasing CB Craig James. 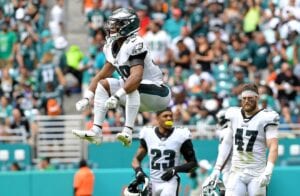 The veteran has bounced on and off the Eagles’ roster the past few seasons.

James, 26, originally signed with the Vikings as an undrafted free agent in 2018. The Vikings waived him with an injury settlement in September, but James re-signed with the team’s practice squad that October.

The Vikings again waived James in August of 2019 and he signed onto the Eagles practice squad soon after. James signed a one-year, $1.5 million contract extension in 2020.

For his career, James has appeared in 21 games for the Eagles, totaling 17 tackles, one fumble recovery and one pass deflection.