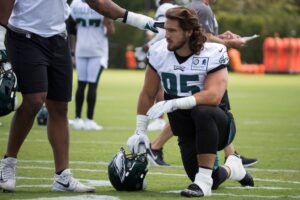 Ostman, 26, signed with the Eagles as an undrafted free agent out of Central Michigan in 2018. He was waived coming out of the preseason and spent his rookie year on the practice squad.

Ostman was re-signed to a futures deal for the 2019 season. In 2020, he was waived again but returned to the practice squad and bounced back and forth from there and the active roster.

In 2020, Ostman appeared in three games for the Eagles and recorded one tackle.