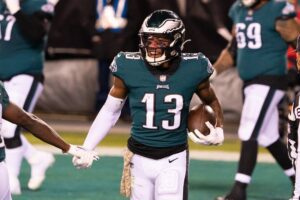 Fulgham, 26, is a former sixth-round pick of the Lions out of Old Dominion back in 2019. He signed a four-year deal worth $2.7 million with Detroit, but was waived a few weeks into the regular season.

The Eagles claimed him and after an early-season stint on the practice squad he was promoted to the active roster. Philadelphia waived him coming out of the preseason and later signed him to their practice squad.