Vincent Taylor, the agent for Eagles LT Jason Peters, announced (per Mike Garafolo) Thursday that the parties agreed to renegotiate Peters’ contract and it’s not worth up $8 million and includes $4 million guaranteed.

The Eagles have already confirmed the news:

The #Eagles have signed Jason Peters to a restructured contract for the 2020 season.

Peters initially resisted moving to left tackle after the team signed him to a one-year, $3 million contract with the intention of him playing right guard and replacing Brandon Brooks, who suffered a torn Achilles a few months ago.

However, Peters changed his mind earlier in the week and opted to make the move back to his old position, which led to some speculation that the team could rework his contract to do right by him.

Philadelphia brought Peters back on a one-year, $3 million contract this past June. 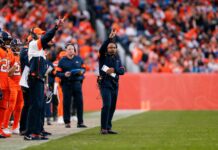 190,763FansLike
7,623FollowersFollow
275,136FollowersFollow
© NFLTradeRumors.co is an independent news source and has no affiliation with the National Football League (NFL), NFL.com, or any team(s).
wpDiscuz
You are going to send email to
Move Comment