Eagles GM Howie Roseman told reporters in his season-ending press conference that QB Jalen Hurts has done enough to be the starting quarterback for the 2022 season, per Zach Berman. 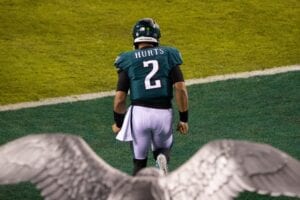 “We said we wanted to see him take the bull by the horn, and he certainly did that,” Roseman said regarding Hurts.

Hurts showed flashes in his first full-time season as the starter this past season, but the way things ended on a down note in a playoff loss to the Buccaneers caused some speculation about his status — especially because the Eagles have plenty of options with three first-round picks this year alone.

But Roseman indicated those picks will be used to build up the team around Hurts and give him a chance to continue to develop.

“We’ve got to do whatever we can to continue to help him develop and how we do that? By surrounding him with really good players,” he said via Berman.