The Philadelphia Eagles announced that they have signed TE Billy Brown to a contract on Friday.

Brown, 24, signed on with the Eagles as an undrafted free agent out of Shepherd back in May of last year. He was among the team’s final roster cuts coming out of the preseason and was signed to their practice squad one day later.

During his senior year at Shepherd as a receiver, Brown recorded 99 receptions for 1,580 yards, 22 touchdowns, and received first-team All-MEC honors. 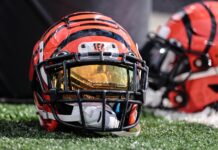