Mike Kaye of NJ.com reports that the Eagles aren’t expected to offer a restricted tender to P Cam Johnston, which means he’ll be an unrestricted free agent this offseason. 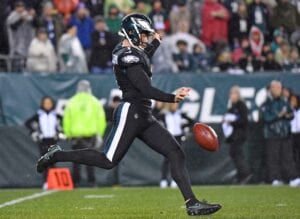 Ian Rapoport confirms the news and adds that the decision is due to cap issues for Philadelphia. Rapoport expects Johnston to have an “active market” this offseason.

Johnston, 29, wound up signing on with the Eagles as an undrafted free agent out of Ohio State back in 2017. He was waived coming out of the preseason before returning to the Eagles on a futures contract for the 2018 season.