Graf, 26, originally signed on with the Eagles as an undrafted free agent out of USC back in 2014. He was unable to make the 53-man roster coming out of the preseason but was later added to the Eagles’ practice squad.

At the end of the 2014 season, the Eagles brought Graf back on a future/reserve contract before waiving him at the start of the 2015 season. The Colts elected to sign Graf to a contract in April of last year but later waived him with an injury settlement earlier in the week.

The Falcons signed Graf to their practice squad back in November of last year and he was later promoted him to their active roster.

Graf has yet to appear in an NFL game. 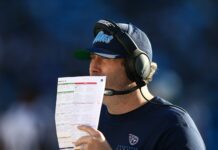 190,424FansLike
7,623FollowersFollow
275,136FollowersFollow
© NFLTradeRumors.co is an independent news source and has no affiliation with the National Football League (NFL), NFL.com, or any team(s).
wpDiscuz
You are going to send email to
Move Comment