D. Orlando Ledbetter of the Atlanta Journal-Constitution reports Falcons DL Ra’Shede Hageman has been charged with three misdemeanors for a domestic violence incident that occurred back in March.

The incident involves the mother of his child. The charges against Hageman include interference with a call for emergency help, battery family violence and cruelty to children in the third degree.

The Falcons are reportedly in contact with the NFL regarding Hageman, and elected to deactivate Hageman for Week 1’s game. Although, they said it was because of their defense plans.

In 2015, Hageman appeared in all 16 games for the Falcons and recorded 27 tackles, one sack and a pass defense. 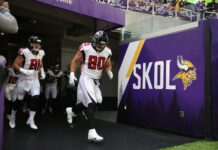 186,630FansLike
7,623FollowersFollow
276,278FollowersFollow
© NFLTradeRumors.co is an independent news source and has no affiliation with the National Football League (NFL), NFL.com, or any team(s).
wpDiscuz